Adiyen swamy ?? Namaskaram. Adiyen is having this sandeham with the following verse of BHU Suktam.

Just commenting To Post on top of the page. ??

Namaskaram. Adiyen listened to today’s Enpani 1643. I think swamy’s speech today would pretty much fit any such sandeham and so, adiyen would take that as a reply for this thread.
“Eppadi irikiradho apadiye anubavippom”. Adiyen will just focus on doing Bhakti and following more acharams ??

Also if we carefully listen again enpani #1643, Velukkudi Swami mentions in the begining of this enpani that “it is difficult to tell everything in 7~10 minutes enpani audio“, however Adiyen can share the answer with Acharya ThiruvAdi Bhalam and Velukkudi Swami’s Aasirvadham, since there is always answer for everything, it just depends on the willingness to share the answer depending up on situation and surroundings. The only exception would be if we don’t know the answer or if we don’t remember the answer or if we don’t know how to apply the answer to this context. This is Swami’s overall sandwich hidden message in the enpani 1643.

So, getting back to the question, Swami has said while describing Supreme LORD Sriman NarayanAn’s Anantha Koti (Countless)  Kalyana Gunas, that BhagavAn has one  Guna called “Sarva Shabta Vaajyatvam (ஸர்வ ஷப்த வாஜ்யதம்),

Vaajyatvam means, it represents HIM only.

The Vishnu Shahasranaamam limits BhagavAn’s naamas to 1000 because for OUR easiness to chant, but HIS naamas are Countless, since any word represents BhagavAn Sriman NarayanAn Only as per HIS Kalyana Guna “Sarva Shabta Vaajyatvam”.

If we can go to Perumal Sannidhi and call HIM as “Perumal or David or Muhammad or Shiva or Indra etc….” HE will accept it since we JeevAthmas use HIS names, BUT the other way like, if see one David or Muhammad or Shiva or Indra and say as “NarayanA” IS NOT APPLICABLE to them, since they are NOT the ParamAthma “NarayanA” as per Panini Maharishi’s Sootram of Grammer for “Roodi Artham (Etimology meaning)” and “Yowkika Artham (Popular usage meaning)”. One who has both Roodi & Yowkika matching is the PARAMATHMA, which is applicable only for “NarayanA” padham/shabtam. All others like JeevAthmas will have Yowkika Artham Popular usage names of BhagavAn NarayanA, but the Roodi Artham is not applicable to a JeevAthma either in Deva Shareeram like Brahma, Shiva, Indra etc….. or jeevathmas in ordinary human bodies like us.

Consort’ means wife or husband or companion or spouse.

We have many neighbors with NarayanA names, so if we say “NarayanA Patni”, that represents the wife of that particular JeevAthma who is using BhagavAn NarayAna’s name, and that person is NOT the actual NarayanA (ParamAthma), just name only. So it is not Thayar here.

But Bhu Sooktham talks about Thayar Bhooma Devi, so all names refer to HER Husband Sri Vishnu as per “Sarva Shabta Vaajyatvam” Kalyana Gunam of BhagavAn.

full meaning from online books is as follows:

upendran is a name for VishNu. indirA therefore is the name of MahA LakshmI
(indrapatnI). Like Her Lord, She has vyApti, the pervasive presence
everywhere (vyApini). He is saluted as “antar bahiSca tat sarvam vyApya
nArayaNa: sthita:”. She is pure and precious like the celestial rivers
(surasaridha) and destroys the sins of errant souls. She is dynamic in movement
like the fast flowing winds (vAyumatI) in the antariksham. Her Lord is jala
Sayanan and She is therefore jala Sayani and seeks the ocean as Her abode
(jalasayanI). As a glorious consort of sarva VyApi, BhU devi shares the
abundance of wealth along with SrI devi, the other consort of SrIman
nArAyaNa.

Ragesh Swami: No question is wrong. Yesterday adiyen was hearing to Sri Vishu Sahasranama Mahimai upanyasam by our Swami. In that Swami was explaining the meaning of the invocation verse where it refers to Krishna (or Vishnu) as “Sasi Varnam”, which literally translates to “color of the moon, which is white” whereas we know from the Vedas and our alwars that Krishna is Gana Shyaam or Karu Mega Varnan. Then how come here it says “White”. Swami explains that it doesn’t refer to the color attribute of the moon but the “cooling effect” that is shared by the moon when someone is exposed to it. Similarly, whoever gets the darshan of Krishna they receive the cooling effect, which is His Karunai.

This confirms why we need proper Acharyas like our Velukkudi Swami to explain to fallen and ignorant people like adiyen. 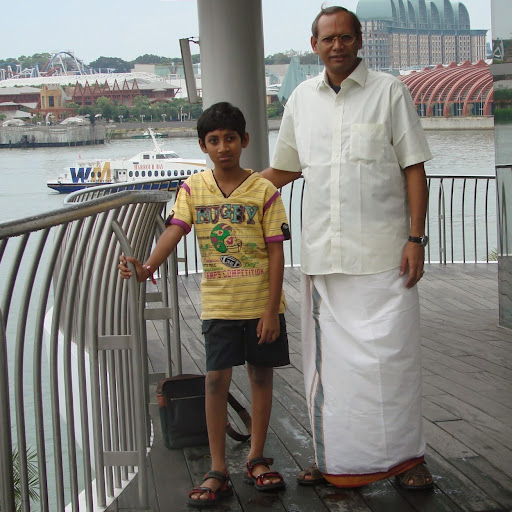 Great reply. Kindly avoid mentioning Abrahamic scripture characters and/or symbols. “Sameness” is the basis on which their conversion factory works.

Thank you very much ElayaAlwar Swamy for taking the taking the time to give an explanation. ??
Thank you Badrinarayana Swamy. Indeed! Adiyen agree fully. ?
Adiyen Ramanuja Dasan